Solitary Bullous Mastocytoma with Dermoscopic Features in a Neonate

Copyright: ©2019 Gündüz et al. This is an open-access article distributed under the terms of the Creative Commons Attribution License, which permits unrestricted use, distribution, and reproduction in any medium, provided the original author and source are credited.

Competing interests: The authors have no conflicts of interest to disclose.

Authorship: All authors have contributed significantly to this publication.

Mastocytosis is characterized by accumulation of clonally proliferated, morphologically and immunophenotypically abnormal mast cells in the skin or the other organs [ 1 ] . Solitary mastocytoma in infants is an uncommon disease that presents as 1–5 cm minimally elevated yellow-to-brown plaque with a smooth, shiny surface mostly located on the arms, limbs, neck, and trunk [ 1 ] . Cutaneous mastocytosis in children follows a benign self-limiting clinical course; therefore, the treatment is only symptomatic and does not alter the natural course of the disease [ 1 ] .

A 37-day-old male infant presented with an asymptomatic bullous lesion on his left thigh. It was first noticed 7 days after cesarean section delivery as a flat infiltration without any surface change. There was no significant family or antenatal history. The parents were referred to our clinic because of the recognition of first whitening then a bulla formation in the morning. On dermatological examination, a 1.5- × 1-cm brown-purple bulla presented on a nonurticarial base surrounded by a yellow hue was seen ( Figure 1A ). During dermoscopy imaging, the bulla was ruptured and a clear fluid was released. Dermoscopic examination showed vascular structures with peripheral yellowish discoloration ( Figure 1B ). The infant did not have any physical or psychomotor disturbances, and the physical examination did not reveal any systemic symptoms. The routine laboratory tests (complete blood cell count, biochemistry) were within normal limits. Informed consent was obtained from the parent of the patient for publication of the photographs. 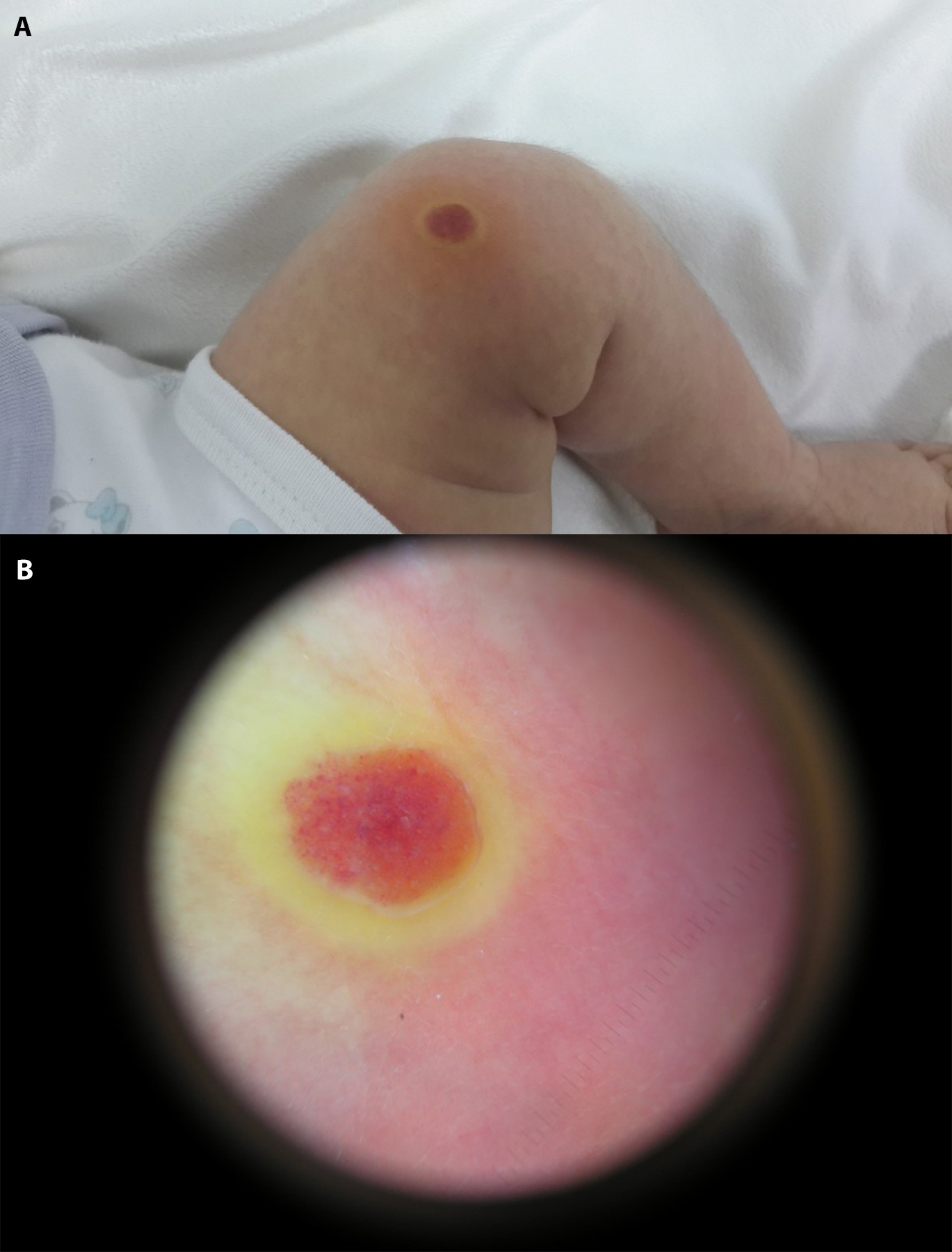 (A) A brown-purple bulla surrounded by a yellow hue; (B) vascular structures with peripheral yellowish discoloration on dermoscopy (×10). [Copyright: ©2019 Gündüz et al.]

The lesion was completely excised, with a differential diagnosis of mastocytoma, juvenile xanthogranuloma, and congenital self-healing reticulohistiocytosis. The histopathological examination demonstrated a dense mast cell infiltration in the dermis. These cells contained eosinophilic granular cytoplasm which stained positively with toluidine blue. The immunohistochemical study demonstrated the expression of proto-oncogene c-kit proteins in these cells using CD117 antibody. With regard to dermatological and histopathological examination, the diagnosis of solitary mastocytoma was made; the patient healed uneventfully. An additional laboratory test of blood tryptase level was within normal limits (6.20 ng/mL). We prescribed an antihistamine suspension (hydroxyzine) and advised the parents to avoid stimuli or agents that may precipitate mediator release. Three months have passed since the diagnosis of mastocytoma, and the patient has not shown any other cutaneous and systemic symptoms or signs consistent with systemic mastocytosis.

A clear association of cutaneous mastocytosis subtypes and dermoscopic patterns has been reported. Four dermoscopic patterns have been identified, namely light brown and yellow-orange blots, pigment network, and reticular vascular forms [ 2 ] . Our case showed a central vascular structure surrounded by a yellow hue under dermoscopy, which is not consistent with previously described dermoscopic patterns. However, none of the patients in the aforementioned study showed a bullous reaction. In our case, the peripheral yellow hue might be representative of yellow-orange blot pattern, and the central vascular structure might reflect the detachment of epidermis due to the bullous reaction.

We report the dermoscopic features with vascular structures surrounded with a yellow hue of solitary bullous mastocytoma in a neonate.

Citation text in the Modal..

View article in other formats